Home > Lifestyle > The Pursuit Of Righteousness 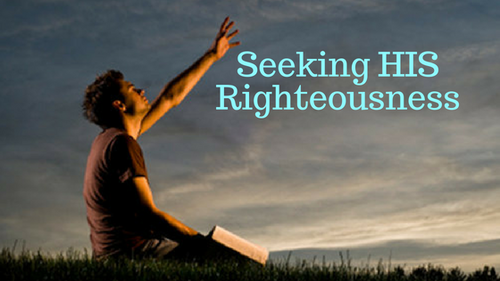 The word ‘Pursuit’ is the noun of the word ‘ pursue’, a verb which means:

: to follow in order to overtake, capture, kill, or defeat.

: to find or employ measures to obtain or accomplish.

: to SEEK
E.g. pursue a goal
: to proceed along
E.g. pursues a northern course  : to follow up or proceed with.

Today, we shall define ‘pursuit’ as :

““Listen to Me, you who follow after righteousness, You who seek the Lord: Look to the rock from which you were hewn, And to the hole of the pit from which you were dug. Look to Abraham your father, And to Sarah who bore you; For I called him alone, And blessed him and increased him.””
‭‭Isaiah‬ ‭51:1-2‬ ‭NKJV‬‬

This is because it takes dedication, patience and determination to be blessed and increased by God, as demonstrated in the lives of Abraham and Sarah.

Throughout the Bible, The Almighty God gave His servants utterance at different time to teach His people, this great lesson of wisdom.

‭‭Proverbs‬ ‭15:9‬ ‭NKJV
“The way of the wicked is an abomination to the Lord, But He loves him who follows righteousness.”

“For the love of money is a root of all kinds of evil, for which some have strayed from the faith in their greediness, and pierced themselves through with many sorrows. But you, O man of God, flee these things and pursue righteousness, godliness, faith, love, patience, gentleness. Fight the good fight of faith, lay hold on eternal life, to which you were also called and have confessed the good confession in the presence of many witnesses.”
‭‭I Timothy‬ ‭6:10-12‬ ‭

In the world, we are living today, things like money, fame, position, power, success and so on contend for our faith and attention but we will do well as believers to stay focused on God and His Righteousness.
His righteousness is more than enough to cover us and by it all our needs are met.

In conclusion, we must realise that God has already shown us the way to go in His word and has also freely given us His righteousness therefore, we cannot manufacture our own but we must steadfastly follow only His path.

His Righteousness is achievable when we keep our eyes on Him!!